Availability and Changes in Consumption of Animal Products

There has been an increasing pressure on the livestock sector to meet the growing demand for high-value animal protein. The world’s livestock sector is growing at an unprecedented rate and the driving force behind this enormous surge is a combination of population growth, rising incomes and urbanization. Annual meat production is projected to increase from 218 million tonnes in 1997-1999 to 376 million tonnes by 2030.

There is a strong positive relationship between the level of income and the consumption of animal protein, with the consumption of meat, milk and eggs increasing at the expense of staple foods. Because of the recent steep decline in prices, developing countries are embarking on higher meat consumption at much lower levels of gross domestic product than the industrialized countries did some 20-30 years ago.

Urbanization is a major driving force influencing global demand for livestock products. Urbanization stimulates improvements in infrastructure, including cold chains, which permit trade in perishable goods. Compared with the less diversified diets of the rural communities, city dwellers have a varied diet rich in animal proteins and fats, and characterized by higher consumption of meat, poultry, milk and other dairy products. Table 4 shows trends in per capita consumption of livestock products in different regions and country groups. There has been a remarkable increase in the consumption of animal products in countries such as Brazil and China, although the levels are still well below the levels of consumption in North American and most other industrialized countries.

As diets become richer and more diverse, the high-value protein that the livestock sector offers improves the nutrition of the vast majority of the world. Livestock products not only provide high-value protein but are also important sources of a wide range of essential micronutrients, in particular minerals such as iron and zinc, and vitamins such as vitamin A. For the large majority of people in the world, particularly in developing countries, livestock products remain a desired food for nutritional value and taste. Excessive consumption of animal products in some countries and social classes can, however, lead to excessive intakes of fat. 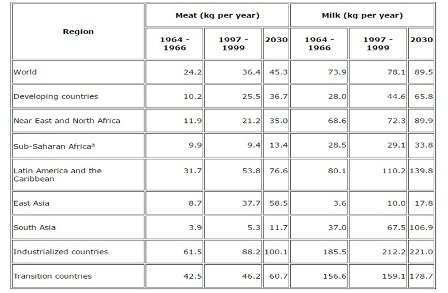 Source: Adapted from reference 4 with the permission of the publisher.

The growing demand for livestock products is likely to have an undesirable impact on the environment. For example, there will be more large-scale, industrial production, often located close to urban centres, which brings with it a range of environmental and public health risks. Attempts have been made to estimate the environmental impact of industrial livestock production. For instance, it has been estimated that the number of people fed in a year per hectare ranges from 22 for potatoes and 19 for rice to 1 and 2, respectively, for beef and lamb (9). The low energy conversion ratio from feed to meat is another concern, since some of the cereal grain food produced is diverted to livestock production. Likewise, land and water requirements for meat production are likely to become a major concern, as the increasing demand for animal products results in more intensive livestock production systems (10).